trends
GET UPDATES ON THIS TOPIC REQUEST A PROPOSAL
OVERVIEW

4 Digital Marketing Trends to Watch For in 2017 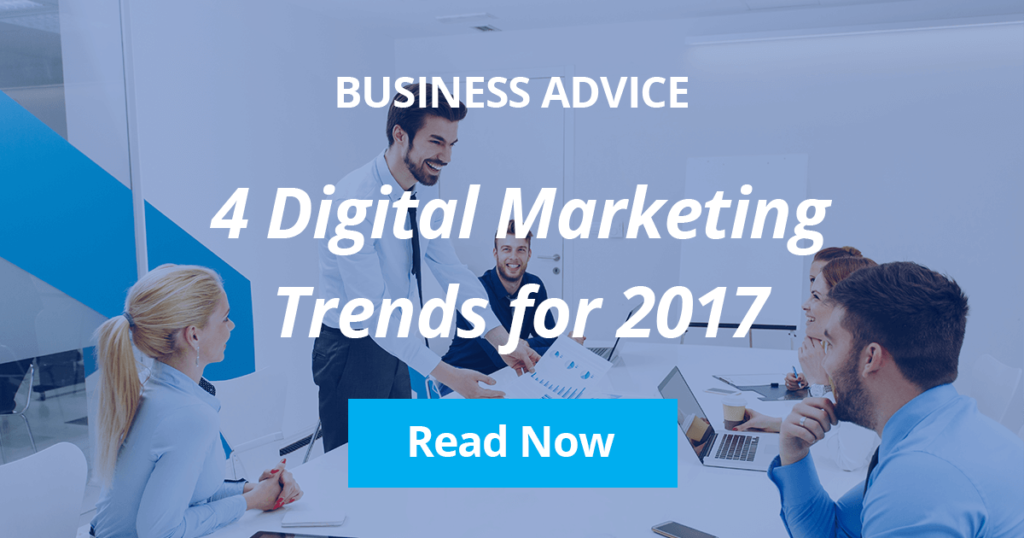 2016 has been a crazy year. We’ve seen the Rio Olympics, President-elect Donald Trump, the Cubs win the World Series, and Virtual Reality phones. As the year draws to an end, we look and observe the Digital Marketing trends that made an impact throughout the year and will continue to in 2017.

This year alone, we’ve seen tremendous leaps in technology, from AI, to live streaming, to virtual reality. Here are four digital marketing trends this year to watch for in 2017.

By now you’ve probably heard about the impact and influence of mobile ad nauseum, but its importance simply can’t be overstated. We’ve seen how mobile dominated the search landscape in 2016, and it’s going to become an even bigger factor in the coming year.

One sign is Google’s decision to start indexing mobile-first websites. This means that mobile-ready sites will be given priority when Google crawls content on the web. So, if your website isn’t mobile-optimized, you may want to address this before foregoing potential SEO boosts. Google’s intention is that a large majority of online sites will be optimized for mobile search engines and browsers.

Forrester Research, an American Tech and Market Research company, predicted that by the end of 2016, 4.8 billion people will have used a smartphone globally. eMarketer believes that by 2019, 72% of US digital ad spending will be from mobile. These two statistics are just snapshots of the greater role that mobile plays not just in advertising, but the global economy.

Not too long ago, AI was simply the imagination of science fiction movies and literature. But over the past couple of years, we’ve made leaps and bounds in memory storage and processing capability, allowing for some truly remarkable feats of machine learning.

Take Google’s RankBrain for example. Google’s newest AI isn’t just a fancy tech demo, it’s the third most important search signal (or ranking factor). The problem is that Google processes three billion searches per day. Roughly 15% of these are complex, long-tail (multiple word) searches never seen before. Google developed RankBrain to better analyze and understand these queries, while creating connections and patterns between existing topics. The end goal is to ensure these brand new searches return results that are useful to the visitor.

RankBrain isn’t the only AI influencing digital marketing. With easier access and a better understanding of AI, companies are beginning to use it in their commerce.

Earlier this year, Facebook launched a bot platform on Messenger, their exclusive messaging app. Bots range in purpose and capability, from delivering you the latest news headlines, to helping you shop for clothes, to helping you book a flight. We may soon start seeing a rise in chat bots that act as 24/7 sales reps or tech support specialists for various companies.

AI is only set to learn at an exponentially fast rate. Within a few short decades (perhaps sooner), it won’t be surprising to witness the first AI overtake humans in computational speed and complexity. It’ll be interesting to witness what robots will be capable of doing for humans, assuming nothing goes catastrophically wrong in the process.

Back in March, Pinterest opened up their Ads Manager to small and medium-sized businesses in the US. This tool allows companies to track their Promoted Pins (Pins that act as ads with higher visibility), manage their campaigns, and better target their audience. Pinterest reports that brands using Ads Manager receive an average 20% more (free) clicks at the start of their campaign.

Instagram also opened its platform up beyond its millennial demographic, gunning for more professional brands to begin using the platform for their advertising. Business Profiles, Insights, and Promoted Posts allow users to not only create ads, but to understand the users that engage with them, allowing for more accurate targeting.

Snapchat is the latest social network to embrace advertising to its audience. Unlike its competitors, however, Snapchat still maintains most control over the platform, instead partnering with teams of creative partners and ad partners. Snapchat Ad Partners develop the software used to buy, sell, and analyze ads, while the Creative Partners develop the content you see on the app.

Social networks are prime advertising spaces precisely because of the amount of personal information they have access to. They know each person’s interests, likes and dislikes, their location, age, gender, and more. On top of this, social networks have international populations in the millions. The next logical step after achieving critical mass is to open it up for advertisers.

In 2014, a company wanted to take the concept of Twitter and translate it into video.The result was a startup called Periscope, an app that Twitter bought before it even publicly launched in 2015. Over the past few months, Twitter struck a deal with the NFL to stream Thursday Night Football games, and with Bloomberg Television to stream the U.S. Presidential Debates. The live stream experiment was catapulted further through Apple TV, Xbox One, and Amazon Fire support.

With the recent addition of bots, games, local shops, and now live videos, Facebook is well on its way to ensure it becomes a platform you never have to leave. Although it officially launched in 2015, Facebook Live was only open to celebrities and verified users. But in a span of two short months, the service expanded worldwide. Soon, everyday users were streaming their daily lives, and their friends could comment or “react” (variations of the like button: happy, sad, angry faces) as they watched. It also helped that they had the support of major publishers such as Times, BuzzFeed, Huffington Post, and Condé Nast.

With the advent of live video, businesses will have to think of creative ways of delivering content that people would want to watch live: interviews, web seminars, shows, news stories, and major national events are just some of the early examples we’ve seen.

These four digital marketing trends outline how our world is evolving in tremendous ways, in just the past year alone. We’ve moved from a static society to a completely dynamic one, developing content quite literally as we experience it. We can access the internet from our palms, program robots to think for us, and share our perspectives at the tap of an icon. Technological constraints are no longer impossibilities, but temporary challenges to solve.

As marketers, our industry is faced with the same problems we’ve always had: attention and engagement. In a sea of digital noise, how does one stand out? How can you provide useful and relevant content, when thousands of others are attempting to do the same? These are questions we’ll continue to seek answers for, and explore as we move towards an increasingly technological and fast-paced global society in 2017 and beyond.